The experience in Rapallo at the IVDC was GIGAWESOME!
I had the chance to meet so many amazing people and make tons of friends!
Here just a few from the Indie Shelter , UNA games , and 10th Art Studio 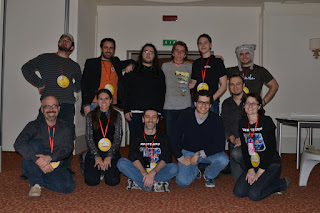 Not mentioning all the celebrities I met!
It was like being a groupie in Duran Duran's backstage! 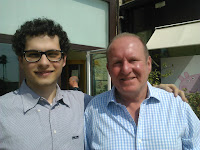 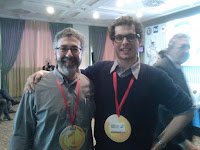 Here I'm with Warren Spector, famous role-playing and video games designer. He created System Shock and one of my favorite game of all times, 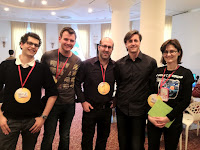 Here, from left to right, there are Dan Marshall from Size Five games, an amazing indie guy who is now freaking famous due to his awesome games! The guy in the middle is Jason della Rocca, he know tons of video games, he is super cool and I bet he knows Kung-Fu. Next to him is Matthew Hopper, creative director at Id Software (do I have to say anything else? of course not!). The lovely lady to the right is Erika from UNA games.

The only one I missed was American McGee. I had no idea what an amazing guy he is, but know I know!

Last, but not least, here I'm on stage with my colleague Matteo (from HeartBit), Dan Marshall, Fabio (the Indie Shelter) and long hair-dude from DarkWave during a speech. Yeah, I know, I'm awesome! 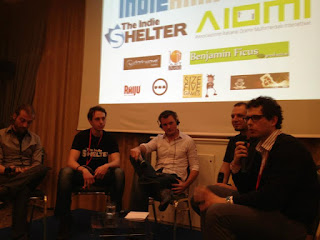 Well, what can I say except MITICI!

Nerds are back into this preposterous turn-based rpg! Fight against Solomon Steel, the evil businessman, while he tries to conquer the universe with his ruthless startup! Get involved with the development of the game, experience glitch as never before and create with us the game of YOUR dreams!

Help Nigel, Mike, Johnny and Francis, four nerdy friends, to fight their way through the funniest RPG quest they ever had! Trapped in a fantasy world and mistaken for Heroes, those four nerds will have to deal with long journeys, hundreds of enemies, villains, super villains and even an Unnamed super villain! Will they be destined to become real Heroes? Will they manage to return home? Will they manage to find a good Pizza restaurant in this weird fantasy world?

MINER WARFARE is a frantic 2D action multiplayer experience.Up to 8 miners dig their way through dirt blocks and other miners to be the wealthiest gold digger at the end of the match!Ten maps, more than twenty weapons, up to 8 players IN LOCAL (yep, 8 players in local) MINER WARFARE is the perfect couch game friendship breaker!